If Growing Gardeners is the motto of our Cobb Master Gardeners, Clyde Riddle is a master of the art. For the past 25 years, Clyde has guided, advised and just plain helped gardeners, both budding and seasoned, to grow in their knowledge of gardening as well as how to spread the knowledge themselves; and that is simply what being a master gardener is all about.

Clyde’s grandparents in Alabama were true farmers, and his parents grew up knowing the “how to” of growing things, just not wanting to follow that path. His parents always kept large, bountiful vegetable gardens and that is where he learned the basics of vegetable gardening. As an adult Clyde followed that tradition and grew all his summer time favorites, canning and freezing as much as possible and enjoying the harvest throughout the year.

For a good part of his life, Clyde lived in Alabama and drove for a living; starting with Trailways and then a taxi company, before settling into Denton Trucklines. As a dedicated driver and hard worker, company management recognized him as a valuable employee and promoted him to manager for the Atlanta office. That transfer brought him to Cobb County almost 50 years ago and he has remained here ever since.

Clyde first became interested in being in the gardening class (as it was first called) in 1979. However, the class filled up and he ended up waiting a year to get a place in the increasingly popular “gardening club” (we weren’t called MGVOCC until later that year). In 1980, Clyde completed the training course and jumped right into volunteer work by helping with a little plot of ground on Love Street in Austell.

On the Austell project, he helped the coordinator, Cliff Castro, maintain a fledgling vegetable patch tended by a group of challenged adults. The participants in the program learned to work the soil, plant, water, weed, and most of all, enjoy the harvest. Working with these very special persons so satisfied Clyde, that he readily joined in the second year to completely plan the layout and redesign of the garden to get maximum return for the group’s efforts. He related a fond memory of the corn harvest that year: They [about an 8 person group] picked several dozen ears of corn, took them inside, boiled them up, and sat down and ate every last bit of it – an image that has to bring a smile to anyone of us who has had similar successes!

It wasn’t long before the Austell project needed a new home, and that was when our Cobb Master Gardeners (Clyde among them) asked the county commissioners for a space in which to continue the gardening program for the Austell patients. Space was granted, and Backacher Gardens was born. The work with the challenged adults has since moved to another location, but, as we all know, Backacher continued and Clyde Riddle spent many seasons working on rows of lovely vegetables, earning himself the reputation as the man to go to for advice on anything about vegetable gardening. For the quarter century spent as a master gardener, Clyde cites his experience working with the challenged adults as his most rewarding.

Clyde worked hard on projects and did even more for our organization. He was voted Cobb Master Gardener of the Year in 1991, and was a nominee for the statewide award. That same year, he served as President of MGVOCC. Throughout his years, he has kept records, documents, letters of correspondence (even some lovely personal notes from Celestine Sibley!), news articles galore, and photos; more information than can be relayed via this short essay, but an invaluable collection that hopefully can somehow be archived.
While Clyde Riddle does have a wealth of written information, what is stored in his own brain is just as valuable. Who knows how many tons of vegetables folks around Cobb have enjoyed due to his advice? Clyde can impart knowledge on how to plant, when to plant and what variety to choose for any vegetable one cares to name. It would be appropriate to end this article with a few ‘teaser’ tips from Clyde; use them to start your next conversation with him: 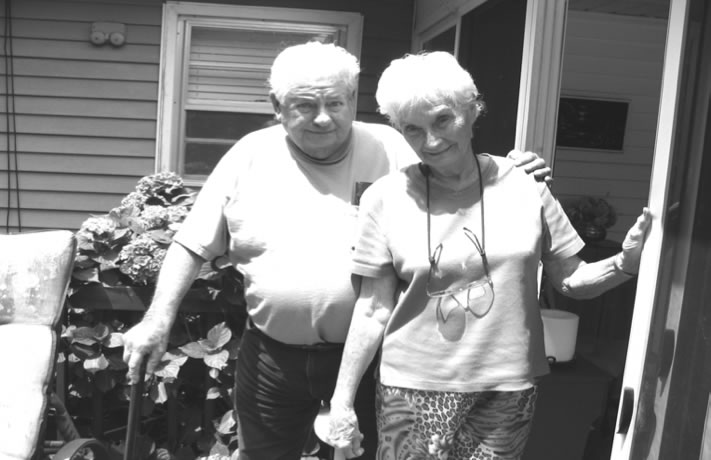 Clyde and his wife, Margaret, are both experienced gardeners

While father time has slowed Clyde down on tending to his beloved vegetables, he is still a fountain of information. If we are lucky, perhaps he will write an article (or two or three!) for us in the very near future. But until then, Clyde Riddle is a gardener’s gardener with whom anyone of us would enjoy exchanging knowledge for the future of growing gardeners.