Ted Groszkiewicz turns 85 this year. Ted is a Marine. His 22-year career began in 1939 with a visit to boot camp at Parris Island, SC and ended with a final overseas tour of 1-year turned 3-year stint in Japan. He started as a grunt and went through several occupational phases including infantry training, quartermaster (supply), recruiting and officer selection. He retired from active duty as a Warrant Officer and joined the civilian work force in 1961.

He took a civilian job in Norfolk, Virginia as a sales representative for a re-seller of consumer products to military commissaries and exchanges. He retired in 1978. Ted’s interest in horticulture coincided with his retirement. His brother-in-law, Vincent Seminara, got him started with bonsai and the rest is this story.

He was a student in the first Master Gardener class of 1979 for Cobb County and became a horticulture assistant at the Co-op Extension Office in 1980. “Knowledge kept to yourself is useless. It’s got to be shared!” Ted is a proactive gardener.

Ted was one of the organizers of the Demonstration Gardens when it was located at the County Fairgrounds. They grew crop vegetables at that time: soy, cotton, peanuts; warm/cold vegetables, such as beets, radishes; and sunflowers. Through a contact at Parks and Recreation, Mrs. Gloria Rogers, the demonstration gardens relocated to its current location. Ted germinated the trident maple in the Xeriscape Garden at the Backacher.

Bonsai is one of Ted’s passions. For 20 years, Ted was active in the NGA Bonsai Club, an offshoot of the Atlanta Bonsai Society. He and Dr. Gilbert have known each other for over 20 years. Dr. Gilbert’s display area is an expansion of Ted’s backyard concept. Having seen the two gardens, it’s interesting to see their collaboration in action.

Ted’s favorite bonsai material is the azalea: satsuki (a Japanese hybrid group of evergreen azaleas that bloom in the fifth month) because they bloom later and their buds aren’t damaged by a late-spring frost. The Eastern native deciduous azaleas are also of interest in the landscape, such as the species R. alabamense from Alabama with a pure white fragrant bloom, and R. austrinum because of its fragrant golden yellow bloom. Another interesting native azalea is R. prunifolium with a limited geographical area of Callaway Gardens with a red flower that blooms in July, August or September in the Atlanta area depending on local environmental conditions. The Balsamaeflorum is an interesting Japanese evergreen hybrid because the blooms look like roses. Serissa is an interesting Asian shrub with small to tiny leaves grown in warmer climates and in a greenhouse by bonsai enthusiasts as a clump style bonsai. Most of the azaleas in his garden are his crosses. Other plant materials he enjoys working with are: Japanese trident maples, an interesting variety with shedding bark (exfoliating), palmatum maples, and Kingsville boxwood. All of his maples are started from seed with the exception of one grafted threadleaf maple that he purchase 40 years ago. Maples require a lot of care. Gardenias are also a lot of work! His bonsai start time is the end of February.

My fondness for azaleas dates back to my military tour of duty in Japan. The breeding of azaleas for bonsai stems from frustrations in trying to style small-leafed azaleas with very large flowers. Therefore, I have tried to develop evergreen azaleas with flowers in scale with small foliage, while at the same time striving for compact, twiggy growth. My success thus far has been very limited, and I may never succeed in my goal but the experience along the way is exciting, fascinating and satisfactory and best of all…I’m still learning! 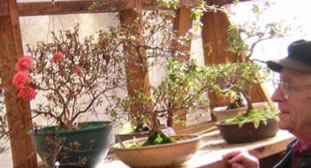 The potting mix that Ted recommends is: 1/3 ground pine bark, 1/3 peat moss and 1/3 granite grit. The object for growing bonsai is to control the growth of the plant material, as an art form, and to simulate the growth process in a forest. He doesn’t fertilize his bonsai on any schedule and believes that the organic material in the bonsai soil mixture is adequate for bonsai growth. The nature of bonsai culture is very different from most types of seasonal gardening.

His wife, Ann, is also a bonsai enthusiast. She has made many of the pots that were used in their bonsai crafting.

Ted’s final advice to gardeners is to “Take time to smell the flowers!”

Some interesting websites about getting started in bonsai are: