The Coffee in Our Herb Garden; An Interview with Morris Coffee 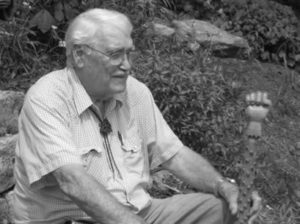 An elaborately carved walking stick assists Morris Coffee as he walks; a product of his latest hobby, one he has been practicing for only the past 10 years. He turns out beautiful figures and ornaments and has even taught beginning wood carving classes. As impressive as his wood artistry is, he is most noted for his plant propagation skill and artistry with herbs. Since the herb garden at Backacher bears his name, his should be a name that we Cobb County Master Gardeners are familiar with. As famous as his name is among our MGs, there is a lot to know about this long-timer.

Morris grew up in the mountains of north Georgia, the oldest of five boys. It was a time when homes had no electricity and farming was as much for survival as a means to make a living. At age 7, came the stock market crash, but the family made it through the rough times by continuing to work the farm. Morris was an experienced plow-hand, plowing with mules at age 10. He and his family bartered eggs and butter for oil and other supplies and of course continued to garden.

His father landed a job at the Ford plant in Hapeville, returning home on the weekends. A few years later, he was able to bring the family to the Atlanta area where Morris experience lights and water for the first time.

In Atlanta, Morris witnessed the development of Delta Airlines and even took a ride on one of Ford’s trimotor planes. This life of being near airplanes became an influential turning point and at age 18, Morris announced to his parents that he wanted to be in the air corps. That was 1941, and in no time he found himself in the war in Europe. By 1944, Morris Coffee had flown 50 bombing missions; most of them from his station in Italy.

After the war, he still made Atlanta his home. He and his wife both had jobs at Delta, and eventually bought a house in Austell making his home in Cobb County ever since.

A newspaper ad in 1984 stirred his interest in a young ‘gardening club’ and joined up to take the course we know today as our master gardener training. As a new MG, he spent most of his time answering phones; an activity that he claims broadened his knowledge base extensively. In 1991, he became master gardener of the year.

As the Backacher demo garden progressed, a site for the herb garden was selected. He chose a layout for the garden based on specifications for a 1600s English Pattern; scaling it to fit the area at Backacher. The large granite stones marking off the beds (familiar to anyone who has been there) were some curbstones that remained “from a street the county had torn up” and were found near the creek just off the Backacher property. At 75 pounds a stone, Morris remembers the moving and placing of each one of them. Plants for the herb garden were propagated by Mr. Coffee himself from cuttings out of his own knot garden. The herb garden opened in 1992 and even now is called the Morris Coffee Herb Garden. 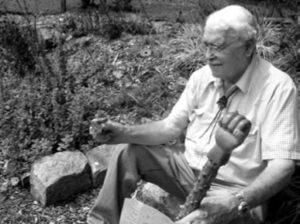 His tips for those who would like to make a start-up herb garden are these:

Morris Coffee’s knowledge of gardening makes him a sought after mentor, but simply giving out instruction doesn’t satisfy his desire to be among his beloved plants. A hip replacement has slowed him down and makes it almost impossible to do work in the garden; a situation that tears at his heart. Just walking in the garden causes him to want to do the work that his body simply won’t allow. His herb garden is truly his legacy.