Maureen Lok, Project Chair for the Center for Children and Young Adults (CCYA) received the 2020 Legacy Award at the “Cheers to Ten Years Gala” held on January 25, 2020 at the Atlanta Country Club. 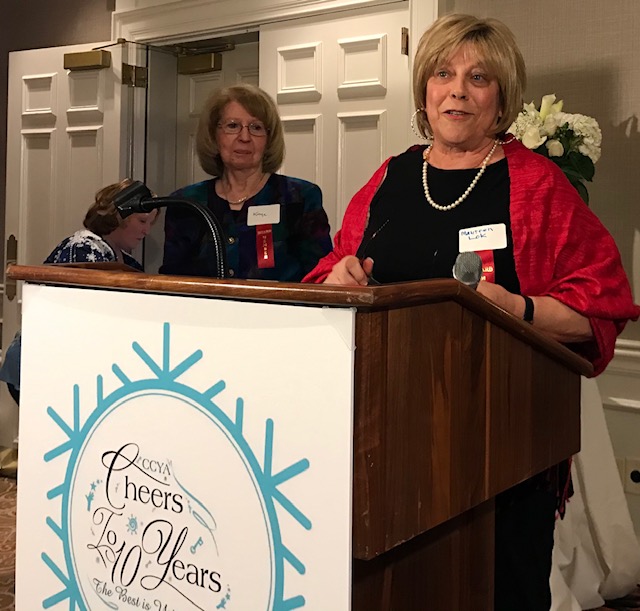 Maureen Lok received the 2020 Legacy Award for her service to the Center for Children and Young Adults. Board Co-Chair Kay Anderson in the background.

Noting her certification as a Master Gardener Volunteer twenty (20) years ago as key to her later becoming a force for the children, staff and Board at CCYA, Maureen was credited with “transforming the campus.”

“Nearly twenty years ago, Maureen Lok became a volunteer of the greatest kind for CCYA when she became a Cobb Master Gardener.  But her service did not stop there. For the past decade, she has served as a key leader in the Garden, the board room, and on the Development Committee.  To staff, Maureen has been a fair and supportive supervisor, a fierce advocate for children, and a good friend and colleague. To her fellow board members, she has been a strong and passionate manager who believes that the youth at CCYA deserve the best care and services we can provide.  There is no doubt that Maureen has been extremely instrumental in helping to transform the campus over the past ten years,” said Bob Fyfe, long-time CCYA Board member.

“In the garden, Maureen first created a six year Nature Arts and Crafts Program for the younger children at CCYA.  Next, she and her team introduced a Program about Friendly Insects to the youth and brought bee keepers with hives onto campus, as well as praying mantis eggs, aphid eggs, and ladybug eggs which hatched and taught the children about good bugs in our environment,” Fyfe and Kaye Anderson, CCYA Board Co-Chair and Founder continued.

Maureen was credited with securing both cash and expert resources for the program and a host of projects for the garden, including the creation of “The Egg Plant,” CCYA’s own chicken coop!

“Maureen has been a strong leader for the Master Gardener Volunteers who work diligently in the CCYA Gardens every Thursday.  She has led the planting of hundreds of tulips and daffodils on campus, as well as many annuals in flowerpots. She has helped supervise many corporate service days with more than 100 volunteers on a given day to improve the grounds,” Bob and Kaye continued.

“Her Master Gardener team has also expanded the farm-to-table program, improving nutrition for CCYA meal services.  She has facilitated the relationship between CCYA and the UGA Extension for Cobb County to provide cooking classes as part of The Center’s Life Skills Education.  She has also taught CCYA youth how to make and can jams and jellies that the kids have sold at the local Farmer’s Markets,” the list goes on.

In 2019 the gardeners and youth harvested more than 1,600 pounds of fruits and vegetables, which included 50 pounds of blueberries, blackberries and raspberries.  Maureen has helped secure partnerships with several companies, including Home Depot to donate fencing and supplies.

Her contributions to the organization do not begin and end in the garden.  She has served as Chairman of the Board for the past eight years, helped raise funds for services and programs at the Center and tirelessly involves herself in keeping CCYA a premier program and place for those children and young adults in our community in need.

“Maureen Lok is a hard worker, leader, volunteer, and philanthropist of the greatest kind and we have been incredibly fortunate that she chose CCYA to be her place of service…. Her impact on CCYA will be everlasting…”

Congratulations Maureen, we are all extremely proud to have you as part of our Master Gardener team!